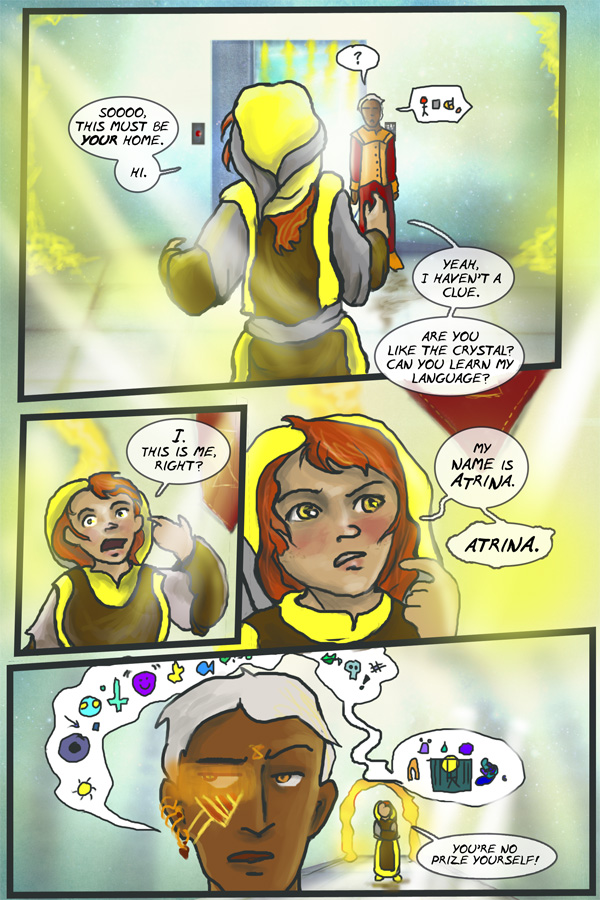 In which Tavar learns that Atrina means imbecile in her language.

It never ceases to amaze me just how far you can tip a wine glass over without the wine SPILLING OUT! (I am easily astonished. And also I’ve been drinking the wine so I might be slightly more amazed by this than usual. It’s pretty okay, but very young with an acidic bite to it. I think my next bottle may be a white, I’ve been getting a slight hankering for a white wine with more soft flavoring. I drink mostly dry reds because I enjoy the complex and rich flavor profile, which makes sense with the whole liking dark coffee, dark chocolate, and dark beer thing… I just like my flavors inteeeeeeeeeense, I guess.) SCIENCE IS AWESOME.

Uh, anyway, hi. If you didn’t read the SELECTED COMIC OF THE WEEK go back and see it, and if you need a new comic to read, today I’d like to link to Will Save World for Gold. This comic is tragically less well known than it should be (though it is in the top ten on TWCL). It’s made by a fellow Canadian and all the sprites are original work. Basically it’s a DnD 4e adventure following the adventures of a bunch of mismatched party members. One’s an asshole with a past to match, one’s a magic user from a mysterious island past who doesn’t like to wear pants, one’s a GIANT ROBOT… yeah, anyway, it’s funny and it updates five times a week. The art might not be as titillating as the amazing art in the comic I linked from the last update, Level, but I have serious respect for anyone who does their own sprites. Sprites are a pain in the butt, man.

Anyway, it’s pretty funny. It also doesn’t seem to have link banners so yeah. I am lazy.

Danny: When will you ever learn that the quest to get INTERNET is a relentless beast. It’s just one big pain in the butt is what it is. I don’t even have home internet, I use my phone’s tether. I think I mentioned that. I tried to get internet and I made an appointment and then Shaw never showed up, and never contacted me to say hey, you didn’t answer the door or NOTHIN’. Anyway, glad things are looking up for you. :D