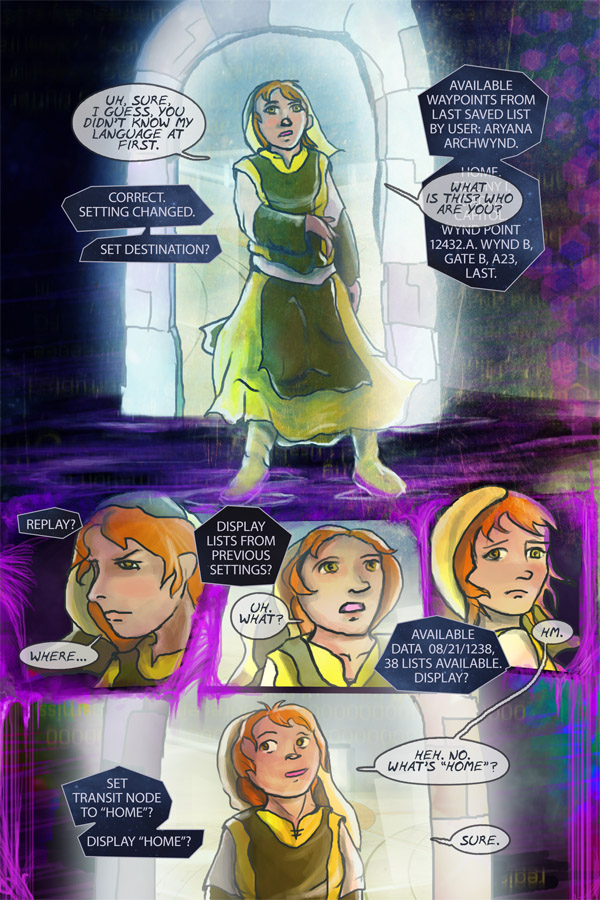 Don’t forget to check out the Comic of the Week, which was dream*scar!

Okay, so, I got three people commented and voted on the next scene, and currently the vote standings are as follows.

Soooooo any tie breakers who haven’t commented yet? D: My worry on cutting to Caed is that it might be a bit jarring to cut to something totally different after everyone’s gotten used to Atrina’s shenanigans. But on the other hand, I worry that if I draw out this scene it’ll be really annoying when I do end up cutting to him (because I have to eventually) and all of this is importannnnt. Anyway, Atrina’s still got a good half dozen more pages to go before this scene is done, maybe more. All in due time, I guess.

In other news, I really need to know how to make those stupid cheese spirals from Superstore. Those dang buns are addictive. I can’t stop eating them, and I make cheese biscuits and that’s not GOOD enough.

I’m really just saying that to distract myself though because I’m a little sad. Tomorrow’s my birthday. I’m nowhere near my family. I won’t get a cake. I won’t get presents. I might get a ‘happy birthday’ from one friend. I’ll get a bunch of automated meaningless messages from forums and I got a 20% off my purchase coupon from Michaels so that I could spoil myself rotten with the money I don’t have. And every time I have another birthday I can’t help think about the birthdays I had when I was a teenager, with my tiny group of awesome nerdy friends, where we’d dress up as Lord of the Rings characters or Star Wars or Final Fantasy or whatever and throw a huge cosplay fest in the middle of nowhereville with the few of us. It makes me sadder than anything that we threw that away for fcking nothing. (I think you would have really liked this comic, man.)

Maybe I’ll make myself a cake, watch Star Trek in my half finished cosplay, and eat some 50% off sushi. Then in two days I’ll make a turkey leg for myself and some potatoes and see if I can figure out how to make stuffing without something to stuff and celebrate Canadian Thanksgiving alone too. I’m almost done season 7 of TNG so I have to get my hands on Voyager or DS9. I also have one season of the original series to watch.

Hey, though, wish me luck–I applied for a graphic design position with UPS which would be awesome. I also got an invitation to a temporary job posting in Vancouver with a company I’d applied for before which I can’t do, for obvious Winnipeg reasons. (It would be 0% profitable with the transit and hotel.) But it still gave me a wee bit of hope that I can get something real person job going on!

Auron: Rofl. EVERY PAGE MUST BE COMMENTED ON. I’m thrilled to have such a dedicated fan already. :D

abe: Dang, such a glowing comment, you’re making me blush. Light and color has always been my thing, something I honed with Between Places.  I only hope that the narrative follows through. I have to admit I’m a bit worried about that part, I apparently did a terrible job of storytelling in my last comic project so this time I’m trying to keep it all organized and every decision I make I question, even though the story’s written! That’s why I’m asking for votes. If I do it wrong I can blame you guys. =P

I intend on leaving Atrina off at the worst possible cliffie. :D Okay, not really. Nothing too bad’s set to happen yet. At least on a scale of things-get-bad based on my knowledge of the events to come, things aren’t really that bad yet. ^___^ Anyway, I always wanted to experiment with unusual paneling. I still don’t feel too confident in it but I’m trying. Like this page was supposed to be the holographic platforms oozing and I don’t think I really nailed it but it still looks cool. Anyway, thank you for the lovely comment and welcome.

Danny: Aha! I was wondering where you came from. DS is a pretty great comic, and while we’re not quite the same kind of genre, I hope Heather’s fans will like my new comic. That’s why I advertised on her comic for a while. :D I’d say that her style inspired me to try branch out from my pretty strictly realistic style from before, though I don’t think I’ll ever be quite that mangatastic.

Anyway, glad to see you around again. Atrina will be the feature for at least a few more pages, but I’d like to introduce my other main character at some point, since the story cycles around the events on the two different planets. Don’t worry, I’ll make sure my cast gets a balance of screentime and I’m pretty sure that if you enjoyed dream*scar you’ll like what’s coming up with the other characters. >.>

Woo 2d games. If I had more know-how I’d like to be able to make simple games too, I like how Homestuck incorporated games into the comic. I’ve played around with Flash but I’m not that good yet. The text, by the way, is from Sim City, it’s a subtle dig at the genre. I don’t take credit for writing it, it’s more of an easter egg. And yeah, that page took a while. D: I knew it’d be hard when I penciled it though and I hate to back off from a challenge. Thank you for the compliment!