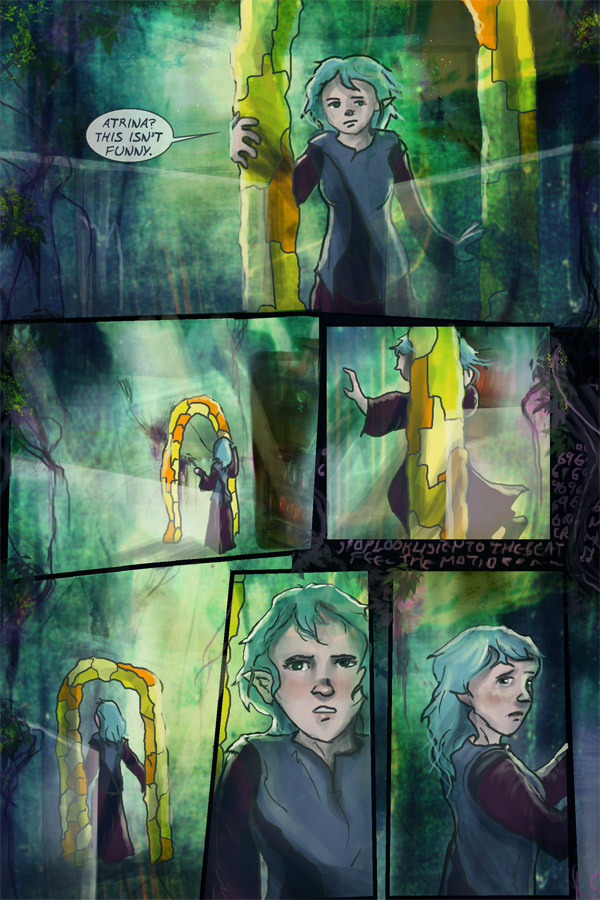 IMPORTANT:
If you visited LAST Friday and there was no page, and you saw the last page Tuesday, please hit the back button TWICE. Page 26 is now live. I did not realize it wasn’t live until WEDNESDAY… after I’d updated with the next page. Ayep. DERP. I repeat, hit the back button twice. You probably missed a page. It wasn’t vitally important but it does help the flow of the conversation. If you guys drop by on an update day and there’s no update, and I haven’t posted anything about it, say something. I’ve managed to accidentally bung up the update twice now by making it a draft or something similar. D: Anyway, it’s a pretty page and you should check it out.

The comic of the week was Snow By Night. Do check it out, it’s a good one.

This page. This is my favorite page. It was my favorite page when I penciled it just because it relies on the action. It’s subtle. It’s a little sad. It’s a reminder that even if things look all peachy, there’s a consequence to every action. It stands in contrast to page 19, where Atrina’s like “I didn’t need you anyway” and here, Leawyn’s like “but I need you”. I liked the inks, even, because they stood fairly strong on their own. And well, I knew it was late and I wasn’t going to have much time to work on it so I figured I’d just plock in the backgrounds I’d made before, scribble in some rough shading and call it a night because hey, it still looked nice.

But I had a vision in my mind that it would be darker, like Atrina left and then the lights went out because she’d activated them and Leawyn doesn’t know how to turn them on. And I am getting pretty fast at getting my basic colors and stuff in place. Takes me a couple of hours to finish a page most of the time. So I started screwing around.

And it actually looks better than I imagined it could. That doesn’t happen a lot. In fact, it hasn’t happened for a very long time. I think in part it’s because I did have the basic backgrounds done so I could focus on the lighting and colors, which are my strong point, which I don’t necessarily have time to do all the time.

Also, the vine panels. You’re welcome, fans of the vines!

Danny: Glad it’s working now. D: Thanks again for letting me know, I still can’t believe I managed to not post the comic for last Friday. Gah. The link here should work, at least. And it is a pretty sweet comic. As for surprises, man, you have no idea how terrified I am about trying to pull off the… PLOT TWISTS. (tear shedding) I’m really worried people will spot things coming a mile away. Maybe I’m extra worried because you see, me and my BFF watch movies together, and usually in around the first ten, fifteen minutes, we’ll have a little conversation that’ll go like “this is going to happen, this guy is going to betray the others, these ones will be good though you can tell because of their hair, that guy’s definitely good, the thing the hero wants is going to turn out to be this other thing and then x y and z will happen because of that…” Seriously, like, we watched Atlantis (the Disney movie). When the cast was introduced, we basically pointed out the main character’s motives, the villain’s motive, the one person that was going to be bad but then turn good later at a critical moment, the whole “these guys are going to step in for the hero when shit hits the fan”, AND we were almost dead on the money for the main plot twist. We did this before the story had even remotely gotten moving. It was still a fun movie, but I’m really worried that I’ll have that predictable of a hero’s journey! (I don’t think I will quite that badly, but that’s just because I know I like to write descent storylines rather than the classic hero’s journey.) Anyway yeah. :D

Auron: I am totally Canadian! :D Born and bred and probably will stay that way, I can’t imagine living anywhere else. You’re from BC, right? There’s a lot of Canadian comics, though, a lot of cool ones you wouldn’t necessarily realize are Canadian at first because the content isn’t Canadian. Goblins is by a Canadian creator. So is Will Save World For Gold. Just to name a couple that I read.

Tigershark: Yes, that was the plan! To to make you curious!