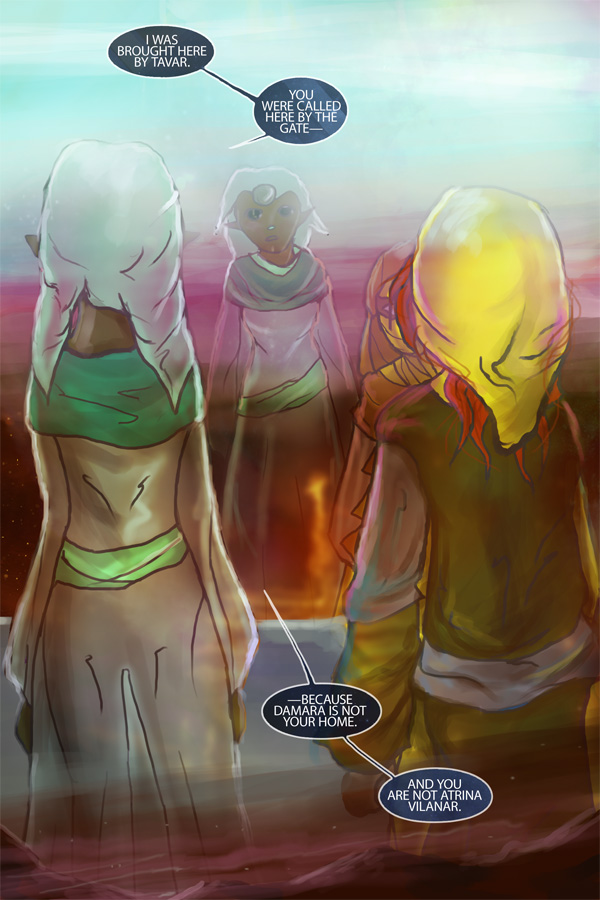 IMPORTANT NOTE: I was so depressed that I actually forgot to hit the post button for FRIDAY’S COMIC! Hit the back button to view it. I guess this page meshes in well enough from last Tuesday’s that you might almost not realize you’re missing a page. I didn’t realize until today that it hadn’t gone live. D: Guys, if you come to the comic on update day morning, and it’s not there, make a comment asking where the crap the update is. This has happened twice now where I’ve forgotten to make the update live. :(

The Comic of the Week is Snow By Night

Honestly, much like Dream*scar, you guys have probably heard of it, it sent me a bunch of readers. Thanks, Snow by Night readers! Anyway, of the comics on the Comic of the Week list, this is one of my older favorites. Basically, there’s a couple of thieves kicking around being smarmy and making a nice easy life for themselves. Then some MYSTERIOUS RIVAL starts dipping their fingers in their pot, and they set out to find the thief to uphold their honor. The official summary says “How do you find a thief who can slip locks and leaves no traces?” Well, how DO you? It’s set in colonial times, which is something I can’t say I’ve seen a lot of.

Anyway, as a Canadian, the whole thieves stealing from wealthy fur traders and bleak winters and tricorn hatted smarmy hot thieves WAIT no that has nothing to do with being Canadian… ahem… appeals to me on a basal level. Plus it’s pretty and there’s a fair archive there to dive through. Enjoy.

I just put a piece of red velvet cake in milk and it turned the milk pink. The horrors. Let’s see, what else. I only have two pages pencilled left! Gonna have to make a decision where I’m going next for real. I hung out with Atrina a while longer than I’d planned–I was originally going to cut while she was in the weird between place.

And since this page is such a great cliffhanger it’s a PERFECT time to cut. I was going to try make this a double update so I prepared you guys for the leap back, but whatever, fair warning. ^_^ Plus I tried to make it obvious by the page layout that time passes, and cuuut. Hope it comes across.

@Danny Yeah, yeah, I’m nocturnal, it’s fine. I haven’t died from it yet! And I usually manage to experience a bit of the daylight hours. I did very much enjoy the week of work in November and I’m looking forward to the stint in December. It might be temporary work but it’ll look good on my resume.

And well, as for where this is heading the about page gives a bit of a clue about what is in the future for some of the characters, and the cast page may or may not be lying through its teeth. Other than that, all I can tell you is to hang onto your hat, and never mind the typical fantasy OH LOOK A GATE INTO NARNIA beginning. It will get worse and I’d like to think there’s a few things I’m doing that people won’t expect until it hits.

@Stig Hammer: Replied to you on the last page! :D