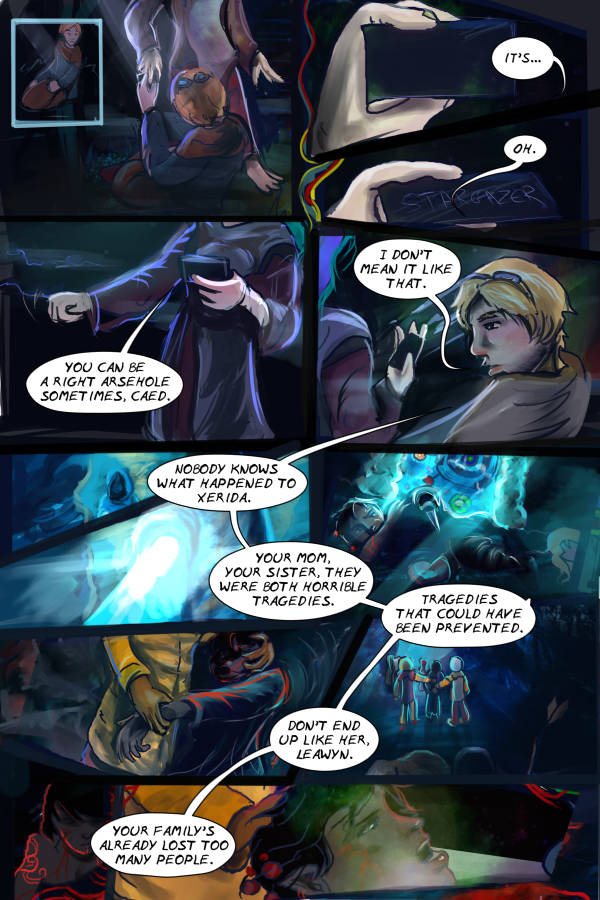 THIS IS WHY IT’S LATE. And yes, I could have stopped at one page. Or two. Or three. I could’ve had a buffer, you guys, I could’ve had a buffer. But you keep giving me money and I really wanted this sequence to be read as a whole, rather than spread out over four weeks–I mean, c’mon, that would’ve just kinda sucked. And this way you get a nice big clump of story at once! If I could update with this many pages all the time I would, really. I prefer to do the double pages when I can, because I found when I read through my own comic the double pages provided a better chunk of information than one page and made me feel less guilty about the occasional splash pages. Plus, I am getting faster, even if I spent like… 8 hours on this page. That’s still only like 2 hours per page. And they were detailed pages.

I could tell you guys what’s going on.

I could explain it.

BUT I THINK ANY GUESSES ON YOUR PART WOULD BE FUNNIER. But for clarification, in case people aren’t keeping track of the year–2777 is the “current” year (technically 2782 is the current year and we’re actually still following a train of thought in the past), Atrina is on the same timeline as Leawyn. The stuff on the left happened “prior”, an unspecified amount of years before the current date.

The color swirl I will explain. It’s the ‘null flow’. There are six elements, each of them have a color attributed to them. And it flows grey > blue > green > red > orange > yellow ad infinitum. I’m NOT going to tell you which element the colors represent at the moment. I will leave you to guess, and to guess people’s elemental alignments. All of the planets represent a single element, as well. You guys are welcome to guess!

I’ve left the filler page one page back for now, in case someone wanted to have a look (it has Xerida’s full design on it; you can also see her full design on the new chibi donatometer) and see how it pans out to the update. Also, there is a quadruple update back in December that I hadn’t shaded? It’s shaded now. The filler page will not be a permanent installation so if you want to keep it, do it now.

Also, I am updating the narratorially unstable cast page to include thumbnails of new characters who have been introduced. Now, the cast page is obviously written from the perspective of a Vilanar zealot who is exaggerating and or possibly lying. I did it as a filler joke and never got around to changing it. Is there any information people would WANT to see on the cast page? I’m opposed to spoilers, and say, down to the blood type minutae, but hey, I don’t know what you guys would like to see.

For the possible fan of Between Places who’s wondering why the hell Saerin is dead on the ground, it is totally just a callback to this page here. You absolutely shouldn’t be reading any more into it than that. It is completely irrelevant. All it is that. There is no other information to be derived from this fact. You should completely forget about this connection right now and simply move along with the story.

Genesee: I unplugged and replugged the cable more times than I can count. So no. It wasn’t that. :D I am never going to admit to what I did wrong but it’s a good thing anyway, since it pointed me in the direction of finding things out. Seriously, I activated the onboard graphics in the bios and you wouldn’t believe how screwed up it went. o__________o Something is definitely amiss.

I currently have a PCI video card. An AMD Raedon 6450. It was the first piece of hardware I ever installed. ^___^ I was so proud of myself at the time. It’s old, but I’m not a gamer. It would appear to be in fine working condition. It’s the integrated graphics that are failing.

And yes. An adventure. That’s one way of putting it. :D There will be dark points in the story, but not all of it will be like that. I like writing about people with issues, though. Escapism. It’s the theme of the day. And probably basically everything I write.